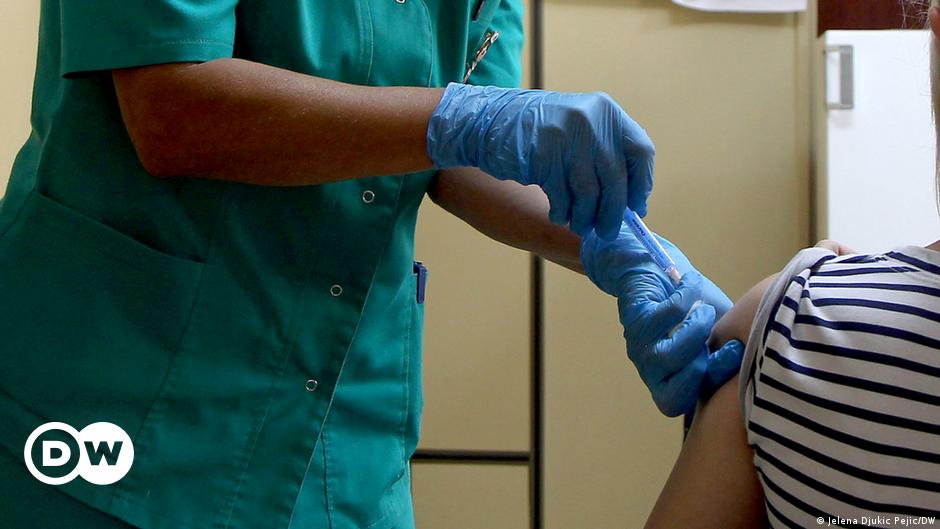 A masked individual, often dressed in a protective suit, bends over a patient, sticks a needle into their arm, and injects a syringe full of liquid. Such scenes are ubiquitous on German television these days. They can also be seen all over the streets in nationwide advertising campaigns – a symbol of sorts.

“Psychologically, this dramatized scene doesn’t really offer a good argument for getting vaccinated,” psychologist Stephan Grünewald told DW. For most people, he says, the picture is just scary. It’s important to recognize the power of images, he argues.

The psychologist also suggests that the government should deal with people’s inner reluctance more intensely if it wants to inspire more of them to get the vaccine. He says that “a lot of unconscious and irrational factors” are at play.

“If the saying goes that half of business is psychology, then you can say it’s three quarters of a pandemic,” Grünewald said.

You have to create trust

Most people have a deep fear of a syringe getting something into their body, psychologist Peter Kirsch tells DW. But a typical vaccination picture emphasizes this act – over and over again.

Kirsch says the technology used to fight the coronavirus has also made things a bit more complicated, noting the fact that most people can’t really imagine what “mRNA vaccines and genetic engineering” are.

In addition, most people also have an aversion to risk, which leads them to “make decisions after assessing their own risks”. That said, research on decision making has shown that the risk is often overstated when weighed against the benefits.

A key factor for those who take risk seriously is trust – an area in which politicians have performed poorly, Kirsch says.

For example, he points to the “outcry that has erupted over the question of whether or not to vaccinate young people”, or on the effectiveness of wearing face masks. In both cases, politicians first answered the question in a sense before turning back soon after.

Kirsch says the shift from “it’s not necessary” to “it’s mandatory” has lost a confidence that is still lacking today.

You need to create incentives

The current question “vaccination: yes or no?” creates further questions of trust. Kirsch, for example, led a study that examined the relationship between an individual’s general trust in institutions, politicians, the business community, and the media and their willingness to be vaccinated. Her study found a significant correlation: the more convinced a person is that institutions work, the more willing they are to be vaccinated – and vice versa.

Skeptics are often more likely to have a “conspiracy mentality,” says Kirsch. “These are people who tend to see hidden powers – with their own agendas – secretly pulling the strings behind the scenes.” This gives them a feeling of ’empowerment’, which means that ‘people no longer feel bound by the rules and norms of society’. It is difficult to do anything to combat this attitude.

Offering incentives is a potential way to incite action, for example, some German authorities recently started offering a free bratwurst or burger with every vaccination. Still, Kirsch admits, undecided individuals will need more than that to convince them to get the jab.

Negative incentives, like rules that say unvaccinated people will have to pay for the coronavirus test so they can go to the movies, could also encourage undecided people to get vaccinated. But Kirsch says he would actually take it a step further: “You have to make people understand that there are certain things that they will have to give up if they don’t want to be vaccinated.”

There has been a lot of discussion in Germany about the idea of ​​restoring certain social freedoms to the “recovered and vaccinated” but not to those who refuse to be vaccinated. The logic is that it would put pressure on those who are undecided, although Kirsch admits, “we will hit a wall with outright anti-vaccines.”

So mandatory vaccinations after all? “For the past year and a half, the federal government has said that vaccination will not be compulsory,” Kirsch said. “A U-turn now would only fuel the anti-vaccine narrative and ‘Querdenker’ conspiracy theorists who think politicians have other things on their minds.”

This article was translated from German by Jon Shelton