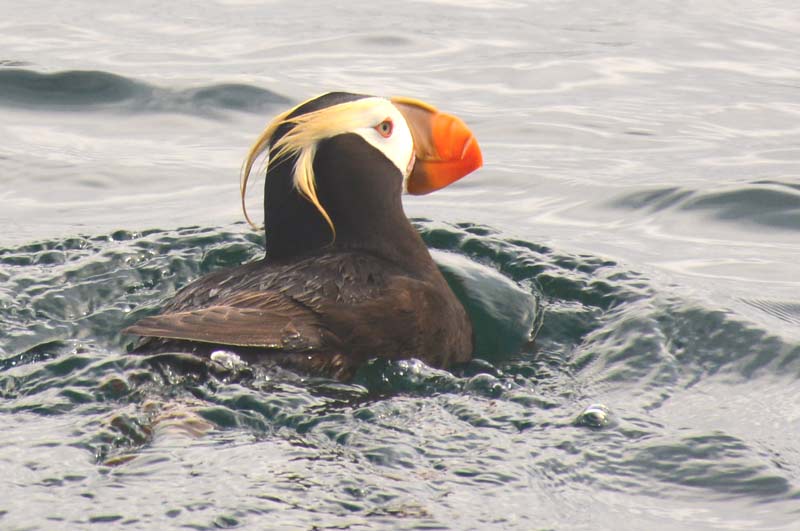 (Cannon Beach, Oregon) – The puffin is once again making headlines along the Oregon coast, this time with another presentation on the fine-feathered friend of the Cannon Beach area. On July 14, Shawn Stephenson of US Fish and Wildlife will present “Tufted Puffin Research Studies of the Oregon Coast” at an online conference on Facebook Live (@Friends of Haystack). It starts at 7 p.m. (Photo courtesy of Friends of Haystack)

This is all part of the Extended World of Haystack Rock Library 2020-2021 lecture series, which is spotlighting the puffin this season.

This most revered creature technically bears the name Fratercula cirrhata. The tufted puffin is a medium to large pelagic seabird and a member of the penguin family. You will find them all over the North Pacific Ocean, with distribution and nests on the coastline and islands off California, Oregon, Washington, British Columbia, Alaska, Japan. and Russia.

Stephensen will take an in-depth look at the various pieces of science put in place, with not always good news.

Unfortunately, their populations are in decline in the southern part of their range, from northern California to British Columbia. In 2008, US Fish and Wildlife researchers conducted a survey of seabirds nesting in burrows along the entire Oregon coast and found a significant decline in the population since the last official count in 1988. At that time, only 15 colonies of tufted puffins were discovered. During the summer of 2021, an assessment of all known historical and current Tufted Puffin breeding sites on the Oregon coast is planned to accurately document the breeding population.

Currently, staff at the Oregon Coast National Wildlife Refuge Complex are collecting samples of tufted puffins for analysis of the population’s genetic structure. The goal is to explore and describe the genetic structure of the Tufted Puffin throughout its North American range.

As part of this assessment, staff at the Oregon Coast National Wildlife Refuge Complex are collecting tufted puffin samples for analysis of the population’s genetic structure. Genetic samples (feathers, blood, dead bird, droppings, etc.) will be opportunistically collected from accessible colony sites during the coast-wide survey. The objective is to explore and describe the genetic structure of the Tufted Puffin throughout its North American range.

“Using a minimum of 10 variable microsatellite markers, we will be screening Tufted Puffin samples collected from the North Pacific,” Stephensen said. “Standard population genetic analyzes will be performed, including STRUCTURE analyzes and pairwise Fst values. These data will help us identify and refine important conservation units and basic measures of Tufted Puffin genetic diversity.

Effective conservation strategies require an understanding of genetic structuring and the relationships between population structure, connectivity, and species decline. COASST (Beached Bird Surveyors) and rehabilitation centers have been contacted to obtain dead birds from Oregon. The Pacific Seabird Group’s Tufted Puffin Technical Committee has been working together for a year to obtain samples, and biologists from Washington, California, Alaska and Canada are also collecting samples.

The rocks, reefs, and islands of the Oregon Islands National Wildlife Refuge are rarely visited or viewed. This survey will provide an opportunity to gather as much information as possible while exploring the islands, so a rapid habitat assessment on Tufted Puffin breeding sites will also be performed during the survey. The objectives of the assessment include documenting the presence or absence of invasive plant species, general habitat condition, documentation of erosion, and predator abundance.

Shawn W. Stephensen holds a Bachelor of Science in Fisheries and Wildlife from Utah State University and a Master of Science in Biological Sciences from the University of Alaska at Anchorage. Stephensen has been a wildlife biologist with the US Fish and Wildlife Service for almost 28 years (since 1989). StephensenStephensen worked in the Fish and Wildlife Enhancement branch in Salt Lake City, Utah, conducting contaminant studies for 4 years; Migratory Bird Management in Anchorage, Alaska, conducting seabird studies for 15 years; and for the past 9 years he has worked at the Oregon Coast National Wildlife Refuge Complex in Newport, Oregon.

Friends of Haystack Rock is a non-profit organization focused on maintaining the health and prosperity of Haystack Rock. Our mission is to promote the preservation and protection of intertidal life and the birds that inhabit the Oregon Islands Marine Garden and National Wildlife Refuge at Haystack Rock. We do this in cooperation with Haystack Rock Awareness Program (HRAP) and other partnerships.

On August 11, Dr. Selina S. Heppell will present “What Can Citizen Science Tell Us About Puffin Declines and North Pacific Climate Change? “ 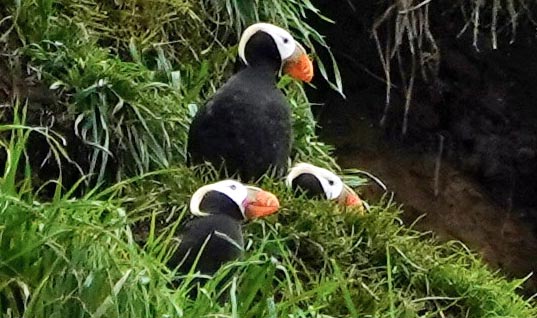 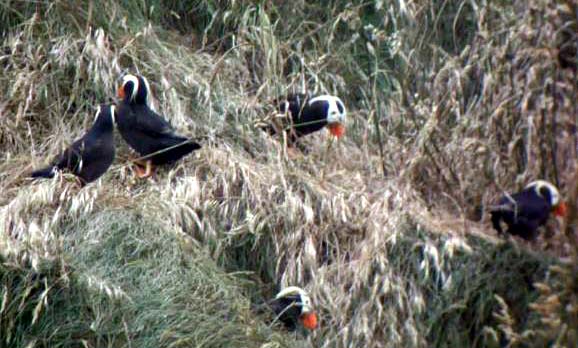 More information on hotels, lodging on the Oregon Coast …..

Return to the Oregon Coast

Woman from Virginia, once a teacher, turns to cystic fibrosis research after the loss of her mother

The Recorder – Grant-funded project giving residents the skills to research local history, record their own stories