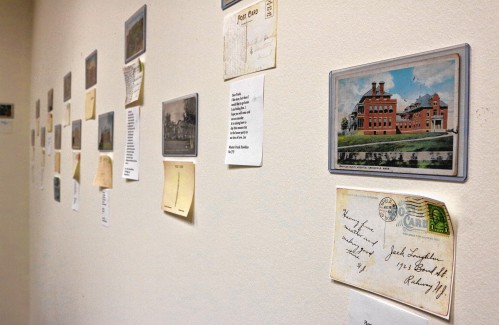 The Recorder – Grant-funded project giving residents the skills to research local history, record their own stories

GREENFIELD – With help from the community, the LAVA Center is launching a digital collection of essays, stories, poems, artwork, photographs and short videos, all aimed at creatively documenting the history of Greenfield.

ECHO Greenfield (Exploring and Creating Histories Ourselves), which is made possible in part by a $ 5,000 humanities grant, aims to inspire the community to learn how to research local history and how to creatively record their own stories. .

“We were particularly interested in the stories that we don’t all already know,” said Jan Maher, a retired educator and member of the project team. “Especially the people whose stories are lost because when they were here – in the past or now – they didn’t see themselves as historically significant, or the people around them didn’t consider them important.”

Maher explained that the concept for ECHO Greenfield began when Vanessa Query, another member of the LAVA Center team, asked her if she could buy a set of 25 historic postcards to display somewhere in Main’s studio. Street.

“That’s where they sat down for a bit, and then (Mass Humanities) went out for a request for proposals for the visual ability grants they were giving out,” Maher said. “We started to think and thought that the postcards would be a springboard for a local history project that could be digitized. This would allow us to develop a website that would initially focus on resources and how to make local history. ”

The project includes 10 interactive training sessions that will give interested community members the opportunity to learn more about ECHO Greenfield, as well as how they can start developing their own questions about Greenfield’s history and, possibly, how they can begin to find answers to these questions. questions.

“Hopefully this will sort of pick up by mid-August, and we’ll be a group of people researching and looking at different questions that we’re all answering together that can be put on this website,” said Lindy, project manager. Whiton.

Recently, the team had guest speaker Carol Aleman, who did her own historical research on the history of the black population in Greenfield, having married into a black family in the 1970s. Maher said that Aleman had shared artefacts from her ex-husband’s family, including school reports, his high school diploma and items he brought back from his military service.

“It was interesting, because she passed them around, so we read them one at a time… and we started to get a real sense of this person who lived here,” Whiton said. “It showed what we’re trying to do, in a really nice way.”

Before Aleman, Joe Graveline and David Brule of the Nolumbeka Project talked about a project they are working on on the story of King Philip’s war between Native Americans and settlers.

“The project they’re working on doesn’t try to merge these (voices) into a single official story, but insists that all of these separate voices be recorded entirely from their own perspective,” Maher said. . “Because it’s … getting closer to the truth than any other version could be.”

Maher said one community that the project has yet to hear about, but wants to hear, is the teachers’ community.

“We would love to have ideas for teaching history to children,” she said.

As the trainings progress and the material is organized for the website – in the same way that postcards have already been added – the final ‘products’ of people research will be digitized for sharing online. .

Maher said the website would not just be a place for examples of local history documentation; it will be a repository of resources for those interested in doing their own research.

“Our historical truths are complicated, and that’s the wonderful thing about them,” she said. “The more we know about the individual tributaries that flow into this shared river, the richer our experience of ourselves and our community. ”

Maher said that ultimately she hopes ECHO Greenfield inspires people’s curiosity about Greenfield, whether it’s the name of the street they live on or those who have lived in their homes. before them, or “just by capturing the story of a family member who has a story to tell.”

“Or maybe,” she said, “it’s just telling their own story because they have something important to share.”

Upcoming ECHO Greenfield training sessions, which all take place at the LAVA Center at 324 Main Street, include:

For more information on ECHO Greenfield, visit echogreenfield.org. To get involved, contact Whiton at [email protected]